To honour and keep the legacy of our ANZAC veterans alive, we remember legendary Lieutenant General Sir J.J. Talbot Hobbs and his family ties to Galvin Engineering.

It all started with an enquiry from David Hobbs, Sir Talbot Hobbs’ great grandson. David is in the midst of faithfully restoring the beautiful family boat, the MV Nereid, originally owned by Talbot Hobbs himself. David was searching for a foundry capable of casting bespoke bronze fittings as part of the project and contacted Duncan Allen, our foundry manager, to meet and discuss. David was understandably surprised and emotional (or “bowled over” to quote David) when he found himself looking at a photo of his great grandfather’s bronze bust hanging in our reception area. After a bit of investigation and various family discussions, it transpired that the Talbot Hobbs memorial was cast by Premier Engineering Co., today known as Galvin Engineering. The men in the photo are the company founders Larry Duffy and Albert Gordan. The coincidence for David was icing on the cake knowing that the same company that cast the bust was now supplying the bronze castings for his boat some 80 years later. A truly remarkable legacy.

The MV Nereid is a proud vessel, beautifully crafted from rare mahogany wood (hull) and Oregon pine with bronze and brass fittings – but judge for yourselves. 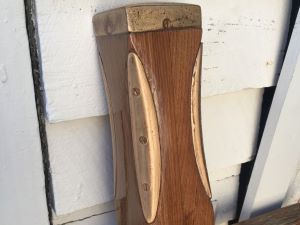 But who was Lieutenant General Sir J.J. Talbot Hobbs?

Born in London in 1864 Talbot Hobbs worked as a draughtsman before migrating to Perth, where he married Edith Ann Hurst in 1890 and together, they raised three sons and four daughters. Designing many of the well-known public buildings in Perth and Fremantle, including the Weld Club (1891), Victoria Hall Fremantle (1896), Windsor Hotel (1898), Samson Bond Store and Elder Building, Fremantle (1902), the Savoy Hotel (1914), St George's College (UWA) and Newspaper House (1935), Hobbs was the first treasurer of the newly formed West Australian Institute of Architects in 1896 and later its president.

Besides his passion for architecture Hobbs was also a dedicated part-time soldier and studied the latest artillery doctrines and gunnery techniques on various trips to Britain. This knowledge in combination with intelligence, instinct, and the ability to listen and adapt was why, when WWI broke out, he was appointed Commander of the Australian 1st Division Artillery and bound for action in 1915, landing at Gallipoli on 25 April. These troops saw the very earliest military action for the newly created Australian Imperial Forces.

From Gallipoli to France and the capture of Pozières’ in March 1916, Hobbs then went on to command the 5th Australian Division. His military efforts over many months through 1916 and 1917 lead to his knighthood (KCB) in January 2018. Hobbs is often credited for the recapture of Villers-Bretonneux in April 1918 which ended the German operations towards Amiens. The battle represents one of Australia’s most prominent military actions of the Great War, with a permanent memorial in the town to this day.

After the war Hobbs returned to the field of architecture where he followed his passion for war memorials and designed the Western Australian War Memorial in Kings Park. He passed away at sea on 21 April 1938, en route to Villers–Bretonneux for the unveiling of the Australian National Memorial by King George VI.

In honour of his contributions to Western Australia, Lieutenant General Sir J.J. Talbot Hobbs received his own permanent memorial, a bronze bust on a towering plinth. The Talbot Hobbs memorial was the first of its kind erected in Perth in commemoration of a distinguished soldier and originally erected in 1940.

The memorial originally overlooked The Esplanade, facing the Weld Club, and was also within sight of the State War Memorial at Mount Eliza (Kings Park), both built to his designs. It was traditionally the receiving point for the salute during the ANZAC Day parade. However, in 2014 the Western Australian Heritage listed memorial was relocated to accommodate the Elizabeth Quay development and is now situated in the Supreme Court Gardens.​ One last note for the story and in some way closing the circle. Duncan Allen’s own grandfather, Howard Eastwood of Subiaco, was a soldier in the 8th Battery, 3rd Field Artillery Brigade (all men from Western Australia), landing at Gallipoli on April 25th, 1915 and under the command of the very same J.J. Talbot Hobbs.