Executive Summary
The World Health Organisation (WHO) states that lead is a cumulative toxicant that can result in adverse health effects. In severe cases, anaemia, seizures, coma, or death may occur. Lead is considered particularly harmful to young children and it is estimated to have contributed to 540,000 deaths worldwide in 2016. There is no known level of lead exposure that is considered safe.This has resulted in lead being restricted or banned from use in some products that could enable the direct ingestion or absorption of lead. Two examples of this has been the banning of lead in petrol and the very strict controls on lead in paint.

Metal contamination of drinking water and its potential health effects has impacted human populations for centuries. It has even been argued that Ancient Rome’s use of lead in water supply infrastructure caused lead poisoning that contributed to the fall of the Roman Empire.

Whilst there is no clear evidence of the effects on human health from the consumption of metals in drinking water, several high profile incidences in Australia of elevated levels of lead being found in drinking water, have heightened concern amongst the health community and the public surrounding the effect on drinking water from leaded plumbing materials. This is leading to calls for regulations, standards, hydraulic designs, and products to be changed to ensure lead ingestion is reduced or eliminated.

At Galvin Engineering, our purpose is to provide Water Solutions for a Healthier Environment. Our focus is on the supply of specialised tapware, water management systems and fixtures for education, health, and public facilities. With increasing anxiety in the community around elevated lead levels in drinking water, we have responded by designing and manufacturing an innovative range of premium quality taps in new lead free and low lead materials - the GalvinClear® Lead Safe™ product range.

This paper looks at the potential health benefits for the community of using Lead Safe™ materials and adopting special production methods in the design and manufacture of drinking bubblers and other tapware, predominantly for use in schools, hospitals, and public areas.

In 2014, 100,000 residents in Flint, Michigan, USA, received drinking water with elevated levels of lead. It was discovered that the water supply had become contaminated with lead that had leached from the ageing plumbing pipe infrastructure. The corrosion of the pipework occurred due to a change in the water source and the failure to use corrosion control measures.

In Australia over the last few years, there has been several high-profile cases of lead contamination being found in our drinking water. A study by Macquarie University in 2016, found that of 212 first draw drinking water samples taken from homes in New South Wales, 8% exceeded the lead levels set in the Australian Drinking Water Guidelines (ADWG). Furthermore, they found that the household plumbing fittings, taps, and pipework were a significant source of drinking water lead contamination. They recommended that products for use in contact with drinking water should be manufactured free from lead.

In Western Australia, the opening of the $1.2 billion Perth Children’s Hospital (PCH) was delayed for 2½ years until March 2018, with one of the reasons cited being elevated lead levels in the building’s water. The lead was alleged to have leached from plumbing fittings and valves inside the hospital due to corrosion resulting from multiple flushes of the system using high chlorine doses. Around this time there were other high profile issues involving lead in water such as the closure of several Perth schools and parks, and media reports surrounding the Perth’s Optus Stadium in 2018. Plumbing products were seen as one of the potential sources of high lead levels in the water.

The products deemed to be at fault at PCH and the Stadium were replaced with lead free alternatives.

In 2018, Geelong Council in Victoria closed down the drinking fountains in several parks over concerns around high levels of lead being found in the water. In May 2019, the Victorian School Building Authority (VSBA) changed its Building Quality Standards Handbook to only allow the use of lead-free or lead-safe tapware and piping systems in government schools. What are the reasons for lead being in drinking water?

It is recognised that many factors contribute to the variability and accuracy of lead concentration results from infield drinking water sampling. This can make it extremely difficult to determine the true source, and/or the reasons for lead being in the water supply.

Besides the quality of the actual water source, these factors include but are not limited to:

Dealing with the build-up of lead in the water due to these factors, is especially important in large and complex plumbing systems, such as those in hospitals, schools, and prisons.

In Australia, plumbing products in contact with potable water typically need to be certified to the relevant WaterMark.

The material compositions allowed are covered under the relevant WaterMark. The WaterMarks may also cross reference to other Australian Standards. When looking at AS/NZS 3718 for example, clause 2.2.4 references the following standards for various copper alloys:

Overseas the situation varies from country to country. In Europe, France, Germany, the Netherlands, and the United Kingdom, work together in a framework known as the 4MS Common Approach. References to maximum lead levels are covered in the document ‘Acceptance of Metallic Materials Used for Products in Contact with Drinking Water – 4MS Common Approach’. Typically, most alloys have a maximum lead level of 0.2%, but there are several exceptions that allow up to 3.5%.

In the USA, the Safe Drinking Water Act (SDWA) prescribes that only pipes, plumbing fixtures, fittings, etc that are considered lead-free, are allowed to be used in the installation or repair of public water systems and in the plumbing of residential or non-residential facilities providing water for human consumption. In 2011, the government changed the definition of lead free for pipes, pipe fittings, etc in the SDWA, from ‘containing not more than 8.0% lead’, to ‘not more than a weighted average of 0.25% lead when used with respect to wetted surfaces of pipe, pipe fittings, plumbing fittings, and fixtures’.

Until recently, our taps and plumbing products have been manufactured using premium quality DZR brass that is approved to Australian Standards. All our products are approved to the relevant WaterMark or StandardsMark, and products in contact with potable water pass the strict testing of AS/NZS 4020:2018 to ensure they are totally safe for use with drinking water. To offer our customers a greater choice of quality taps for a healthier environment, over the last three years, we have also been making taps using special manufacturing techniques and new materials that are either lead-free or low in lead. As ‘lead free’ is not currently defined by law or plumbing codes in Australia and New Zealand, we have based our definition of Lead Safe™ on the requirements of s1417 of the USA’s SDWA, and the relevant US standards, NSF6120 and NSF37221.

We have been utilising materials that are listed on the European’s ‘4MS Common Composition List’ to ensure we use the safest material currently available. Largely we have been using either 316 stainless steel, or compositions of DZR brass that contain less than 0.2% lead.

Along with this, we have also implemented new methods of manufacture and a special process of washing parts to ensure contaminants are eliminated. This new GalvinClear® Lead Safe™ product range has also passed the relevant AS/NZS 4020:2018 testing requirements and is listed on our WaterMark schedules.

In 2019, Galvin Engineering commissioned a study to sample and accurately measure what levels of lead may be leached from drinking bubblers manufactured from these different materials. Professor of Environmental Engineering, Anas Ghadouani (BSc MSc PhD), and his faculty team at the University of Western Australia (UWA) were engaged to develop and undertake comprehensive testing. Water samples were analysed at an independent NATA approved laboratory in Perth, ALS Environmental.

Three of our Ezy-Drink® drinking bubbler models were tested. The bubblers were manufactured in our ISO 9001 and ISO 14001 endorsed factory, using our standard strict quality control procedures and a controlled clean environment. Part of the manufacturing process includes each bubbler being washed in a special solution to remove any residual contaminants that could be left inside the product.

One bubbler was manufactured using traditional high quality standard DZR brass containing less than 2.5% lead. Two bubblers were produced using our new GalvinClear® Lead Safe™ materials. The first was made from a premium grade lead free 316 stainless steel. The second was produced using a special low lead DZR brass that contains less than 0.2% lead content. This alloy is approved to the European’s 4MS Common Approach and complies to the strict requirement of the USA’s Safe Drinking Water Act.

The testing regime was selected after careful examination of current Australian Standards such as AS/NZS 4020:2018 and AS/NZS 5667.5:1998 – Water quality – Sampling – Part 5: Guidance on sampling of drinking water and water used for food and beverage processing. Reference was also made to other Australian authorities including the 2016 study performed by Macquarie University, and later during testing to enHealth’s June 2019 draft guideline ‘Reducing exposure to metals in drinking water from plumbing products’. In addition, overseas guidelines such as those issued by Health Canada in 201724 and by the USA’s EPA in 2016, were also cross referenced.

Based on this information, and after consulting several NATA approved laboratories, the following methodology was used: 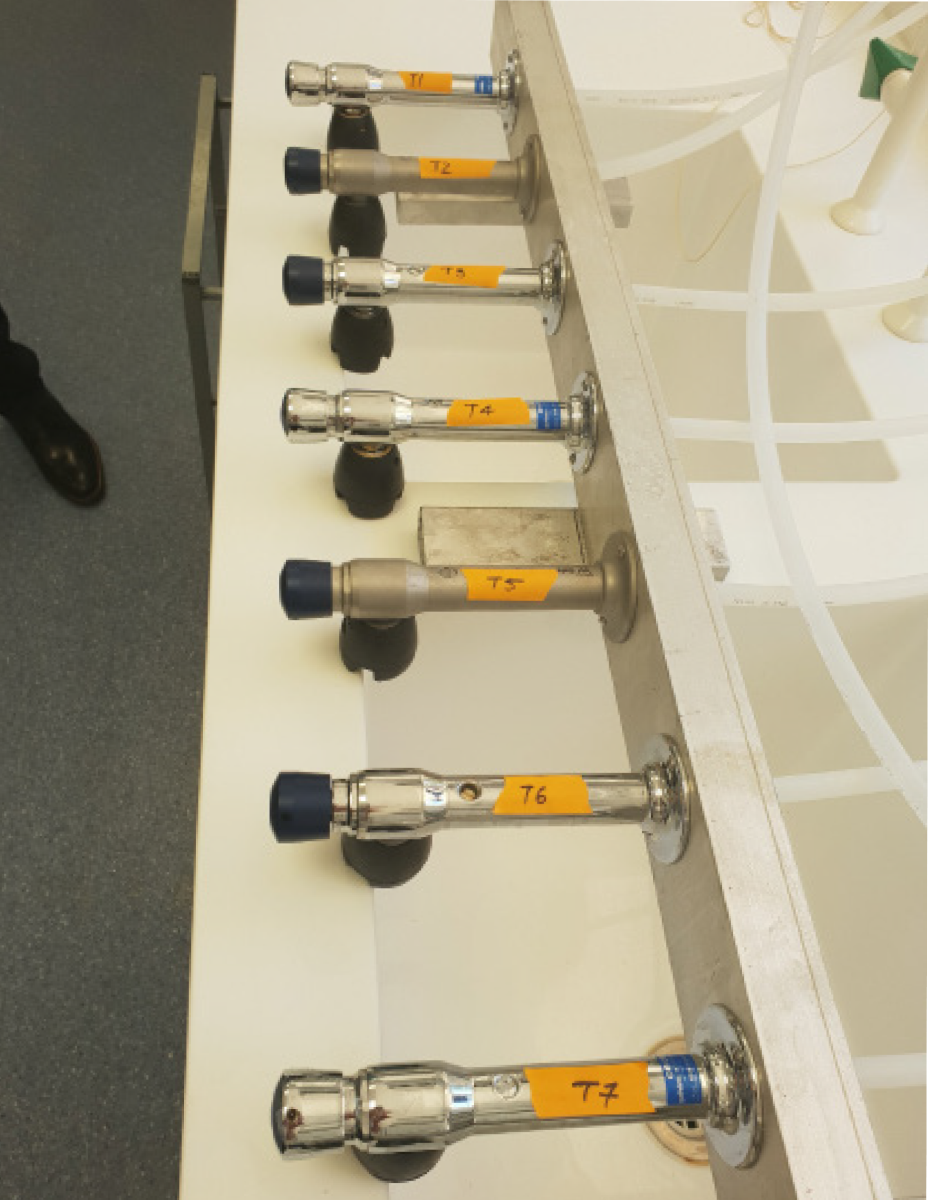 The testing was performed in a controlled laboratory at the UWA utilising custom made testing apparatus.

Deionised water was used to minimise the potential of lead being introduced into the tests via the water supply. It should be noted that deionised water is considered aggressive on certain materials, so any resultant leaching could be higher than is expected in the field.

What were the results from the Ezy-Drink® bubblers manufactured using Lead Safe™ technology?

The final results from four separate rounds of tests during 2019 were:

Therefore, all styles of Ezy-Drink® bubblers are delivering water that is many times under the maximum allowable lead level of <0.01mg/L as set in the ADWG and therefore could be considered safer for drinking water.

A safer choice for schools and hospitals

The WHO state there is no known level of lead exposure that is considered safe and it is agreed by health experts that any form of lead ingestion should be reduced or eliminated. This study confirms, lead exposure in drinking water is preventable, and subject to the inlet water being lead free:

Products manufactured using GalvinClear® Lead Safe™ materials and technology are a safer and healthier choice for the community, especially for areas of greatest risk such as schools and hospitals